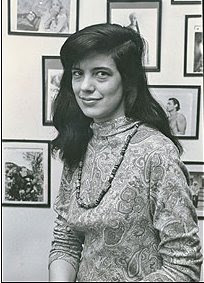 12/21/59Tonight she [Irene Fornes] went from work to meet Inez at the San Remo, Ann Morrissette [journalist and playwright] was there. After, the Cedar Bar. She came home at 12:00; I was asleep . . . She came to bed, told me about the conversations of the evening, at 2:00 asked that the light be put out, went to sleep. I was paralyzed, mute, swollen with tears. I smoked, she slept. [pag. 220]

[Undated, most likely late January 1960]
She would like to think that I do not exist. I, she told me yesterday, represent to her Latin, foreign, good taste, sexual experience, uneducated intelligence (—this is not correct, since according to dictionary, education is development of character + mental powers as well as systematic instruction).Today after I have forced her to partly uncover the ball bearing where lies the power for these things, she pushes me away. I call her + she comes + begins to make love to me.I want it so badly, yet how can I deceive myself that she ever wanted it—I didn’t.

But Irene explained that she had never wanted [it] more. The proof, the orgasm. Yet didn’t Irene know that she didn’t give it to me? That I tore it from her?That’s how I deceived myself, when I used as proof the fact that she had never given it before. She never gave it before, + she never gave it to me, I took it. Until she decided to prevent me from taking it, at any cost. Was it a coincidence that this decision had to do with the final breakup with H? Was it not when that happened, she was for the first time face to face with me, + then furious with my presence, with my intrusion. [p. 230][...]

1962- Female sexuality: two types, the responder + the initiator.All sex is both active (having the dynamo inside oneself) + passive (surrendering).Fear of what people will think—not the natural temperament— makes most women dependent on being desired before they can desire.Love as incorporation, being incorporated. I must resist that.Should be tension in the palm of one’s hand, as the dancing instructor says. You don’t get any messages if you’re limp.Try to think of this separation [from Irene] as such a tension.So I can get and give—messages . . . To cut out of the “Despair—I’ve been rejected” or “Fuck her” alternatives.In this society, one must choose what “feeds” [the words “goes into” are crossed out]—the body must deprive the mind, + vice versa. Unless one is very lucky or smart, to begin with, which I was not.

Where do I want my vitality to go? To books or to sex, to ambition or to love, to anxiety or to sensuality? Can’t have both. Don’t even think of the outside chance that I will have it all back at the end.Something vulgar, nasty, craven, anti-life, snobbish in the sensibilities of Henry James + Proust. Glamor of money, dirtiness of sex.One is either an outside (Homer, Tolstoy) or an inside (Kafka) writer. The world or madness. Homer + Tolstoy like figurative painting—try to represent a world with sublime charity, beyond judgment. Or—uncork one’s madness. The first is far greater. I will only be the second kind of writer. [pag. 305]
[...]

[Undated except “Sun. night,” but clearly part of the Puerto Rico diary]

This aching for I. the last two days—what is it made of ? Sense of loss; frustration; resentment? That? And if that, only that? I feel her impenetrability—I can’t grasp her. She eludes me, evades me—yet I can’t stop wanting from her.Her judgments of me are like a thorn, an arrow, a barbed hook. I writhe. I want to get away + I want her to draw me in, both at the same time.First off, I have to be calm. The business with Alfred poisons the air because I let it. If I could be generous (+ not so needy) I wouldn’t care—either because I didn’t care for Irene or because I did. Either way I shouldn’t mind.

What’s burning me now? The reproach about no social life.With me every night she tells me she wants to work. That is, be downtown for her social club.I hate I. [’s] talk. I hate the way she’s always making plans, + doing 1/10th of what she plans. I hate the way she stays in the tub for an hour + a half.—Not because I hate laziness or sloppiness, but because it doesn’t go with her manness + tenseness. I hate the way she insists I listen to her.